As the article states, “There are now an estimated half a million French men and women living and working in England, most of them under 35.” One of those interviewed in the article, Jean-Claude Cothias, said that, in Britain, as opposed to France, “The economy is viewed…as something needed, one of the most important parts of society, if you want everyone to be clothed and fed. This creates a totally different environment for business.” 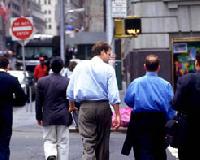 As to why Japan seems to have such low self-reporting rates of entrepreneurial attitudes, there could be many potential reasons. People could still be biased towards going to work for a safe, stable Japanese company, though perhaps that is less true than before. Based on my still limited experiences of living in Japan, I would say that entrepreneurship is driven fundamentally by a desire to reach above your current standing and create something new. For whatever reason, Japan’s economic life offers plenty of opportunity to have a relatively comfortable life without a lot of risk. As Japanese entrepreneur Joi Ito said on his blog a few years ago, “Japan is still low-risk / high-return for people following the "elite" path.”

Entrepreneurial attitudes will rise, and should rise

But there’s no reason Japanese people’s low attitude towards entrepreneurship will always be with us. Entrepreneurial attitudes are almost assuredly rising among a younger Japanese generation that has only known the relative stagnation of the post-bubble era. They would thus perceive less of a future in a big company, and might try something more exciting on their own. As to the “risk-taking” and “flexibility” elements of a personality that are needed to become an entrepreneur, the people of Japan have adapted before to large changes in the global economy, and there is no reason why they can’t do so again, as noted in the book “ Japan’s Business Renaissance. ”

In the long run, entrepreneurship is important, to an economy and to society. As stated by the Global Entrepreneurship Monitor, as a result of entrepreneurship, “small and newer firms generate innovations, fill market niches, and increase competition, thereby contributing to resource reallocation in economic activity.” It is easy to forget that the largest firms often started as nothing more than a family business or a small entrepreneurial venture. Globis itself was born from one rented classroom, but now serves tens of thousands of customers every year.

Whatever the reasons for Japan’s low rates of perceived abilities to be an entrepreneur, we would note that this is only a “perception,” not an actuality. If enough people receive enough training and support, while having the courage to take risks and persevere, then there’s no reason why those numbers can’t eventually approach those of other countries.

Adam Carstens is a Senior Associate with Globis International School and a staff editor at GLOBIS.JP. Before working at Globis, Adam worked with the consulting firms The Attention Company and North Star Leadership Group. He helped with the research for two books, “Japan’s Business Renaissance”(released in Japan as “Samurai Jinzai-ron”) and “Got Game: How the Gamer Generation Is Reshaping Business Forever.” Prior to that, Adam specialized in foreign policy and international trade analysis for a U.S. Congressman and a U.S. Senator in Washington, DC, working to expand trade links between the U.S., China and Vietnam. Adam has also helped manage website operations for a high profile member of the Fortune 500, and led a team that created an award-winning project on the future direction of 3G wireless technologies.Adam received his MBA from the Thunderbird School of Global Management.